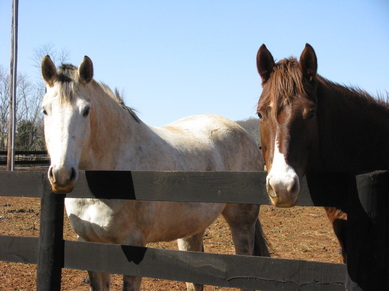 Savvy is a 1992 Quarter Horse. Susan purchased him as a 3 year old. In his younger days Savvy showed on the hunter circuits and at Quarter Horse Congress. Savvy is now mostly retired but still participates in the therapeutic riding camp each year. Savvy is also Susan's "logo horse" for Elmwood Farm.

Goblin is a 2000 Percheron Thoroughbred cross. Susan purchased him as a 3 year old from a local friend and trainer Stacey Donnelly who bred and broke him. Susan and Goblin started their dressage careers together. Goblin is now retired. 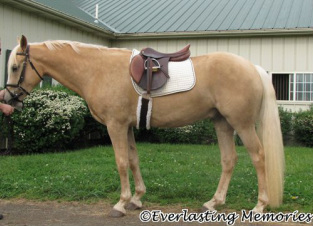 Tuffy May 2012
Tuffy is a 2009 Welsh Cob x Quarter/Arab gelding. He is by Derwen Demark (WPCSA) of Glenhaven's Welsh Cobs and out of Peaches n Cream (QHxAHA). Tuffy is a large boned four year old that shows great promise for the dressage ring and as a "do anything" horse.
We will be adding more photos of Tuffy in the near future.

Peaches is a 2003 Quarter Horse Arabian cross. She suffered an injury as a foal unfortunately making her un-ride able. Peaches' has had one foal (Tuffy) and proved to be an excellent broodmare and mom!

Bond is an aged quarter horse gelding. He is aged at approximately 35 years old. Bond originally came to Elmwood Farm to be used during the therapeutic riding camp. Bond is now retired and living out his life fat and happy! 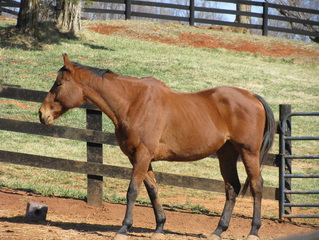 George is an aged Thoroughbred who came to Elmwood as a rescue case.  He is now retired and living the "fat and healthy" life at Elmwood. 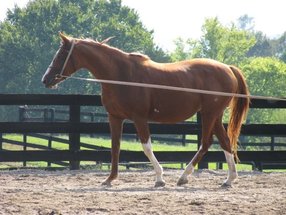 Charity is an aged mare who came to Elmwood in 2007 with 2 other rescues. She is now retired and living the "fat and healthy" life at Elmwood.